I’ve got a little extra time this morning before leaving for work (!) so I thought I’d just do a bit of a brain dump and share some random thoughts.

Eating healthy is so much more important than exercise in terms of weight loss. I’ve had two awesome food days in a row – and I’m 2.5 lbs. less this morning that 2 days ago.

A long day at school is no excuse to skip the gym. It usually means I’ll come home and eat mindlessly instead.

I think I’m going to ask my doctor to test my thyroid. I don’t want to blame my weight loss difficulty on anything but lack of great eating/exercise, but I feel like its been more difficult than it should be. It is definitely more difficult than just a few years ago. There’s a family history so it’s not outside the realm of possibility. Anyone have experience with this?

After steam-cleaning the couch last weekend, I spilled coffee on it yesterday morning. Whoops. Thankfully I acted fast and it doesn’t look like there will be a stain.

I just bought/exchanged a few things at Old Navy because a 20% off was about to expire. The next day I got a 35% off coupon. In 7-9 days I’ll be getting a package from Old Navy. Whoops. Gets me every time. (Though I am excited about new workout gear and the cute flats I ordered.)

Some pictures from the week:

Protein smoothie. Took me forever to drink and kept me full even longer. Win. 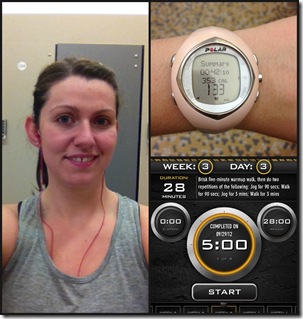 Actually ran on the treadmill.

I made a huge batch of steel cut oats Saturday morning and portioned them for breakfast. Best idea ever. It’s saved me so much time in the morning and has been keeping me so full.

I’ve (I think) gotten back into a running routine. I’ve been following the Couch to 10k Plan instead of the 5k. I restarted at week 3, but actually have 2 races on the calendar to train for – a 5k Veterans Day weekend and either 5k or 10k Turkey Trot. I feel more like me again.

I can’t believe it’s almost been a year since I ran the Chicago Marathon. I also can’t believe I never finished my post about it.

I really want to write a 1 year post-marathon reflective.

Also, the high this year is supposed to be 53 degrees. Last year it got into the 80s. WTF weather?!?

Related – I totally plan on making a yummy breakfast and watching the Chicago Marathon live feed on nbcchicago.com Sunday morning. What? It’s super inspiring and actually what made me want to run it in the first place, watching the 2010 race online.

Apparently even when I don’t run often/well/fast I’m still a total run nerd.

Speaking of being a run nerd, Kristen helped me figure out my Halloween costume (for school, anyway) last night. Runner, complete with medals. I think the kids will dig it. The comfort factor is a total bonus.

Winter break can’t get here soon enough. As much as I love school/work/kids, 2 weeks of freedom will be really nice.

Have a great Tuesday!